Never one to be unprepared, 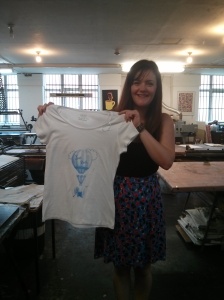 the night before my Beginner’s Screen Printing Class in Dalston’s Print Club, I squinted down a list I wish I’d taken the time to read before. Among instructions on meeting times and protective clothing, was also a very clear and daunting line that read:

Your image artwork must be A4 black and white, please bring it along on a USB saved as a .JPEG/.PDF/.PSD file format.

Now this is by no way to excuse my part-lifted-but-also-poorly-edited-in-Paint internet image. It’s purely highlighting that the expectations of me for a BEGINNER’S screen printing workshop were a little high. In fact, after hearing over and over again that the perfecting the design was the most important part, you’d think they could touch upon it during the class itself. Anyway, fair’s fair – it was there all along and after a flurry of googling I got my image, saved it in black and white and most

likely square, and went to bed.

The collection of people on the day were a variety of local hipsters, artists, hobbyists and few actually serious about screen printing. Most seem to have made it to the ‘bring your own artwork’ line and some were jolly good.

We first were schooled in the various meshes and options when it comes to screen printing – different materials stretched over a frame (wooden or metal) to provide different effects with the most known ‘silk’ having the best effect with keeping prints accurate due to its close knit. That said, no one actually uses silk anymore but its similar and hardier cousin, polyester. To understand a bit more about the screen printing process in detail – have a look here on how stuff works.

Once we’d covered the theory, we were shown on the big screen how to use Photoshop to prepare the images prior to printing. The most important thing to get your head around, is the final design you want to transfer onto your screen must be a negative transfer. So essentially you slop on some emulsion over your image on your screen, treat it in a kiln and let it dry off. Any hole in the image will allow paint through so once it’s transferred it’s important to doctor with marker pens and tape to be sure. 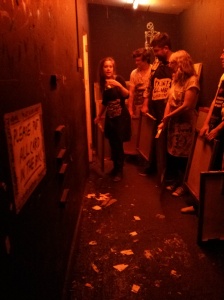 Once that’s dry, you’re ready to do some printing. This is done in big printing machines whereby you add a very healthy dose of paint to your screen with the intended paper to print below, held firmly with tape as you’ll be going over a few times and don’t want it to shift. Use a squeegee ‘loaded up’ with paint, you press down a lot harder than you imagine, scraping the paint down over your surface and bring it back before lifting to check.

Think of pancakes when expecting the first few and accordingly add more oil or lower the heat under the pan, same same. And just like that you’ve got a practically inexhaustible template to print millions of your T-shirts or canvas bags.

It was a fun skill to master, but I 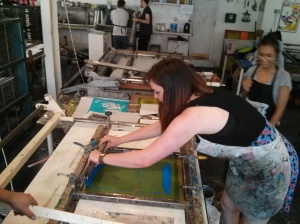 realised early on that the real work goes into perfecting the design long before you enter the studio. My advice to you is to be sure of your design skills if you want to thrive in the art of printing. Otherwise if you’ve got an idea but need someone else to do the dirty work, there’s always threadless.

Print Club is the best known London printing club I could find, and while membership is a hefty £100/month (after you’ve completed a £50 beginner’s class), you do have free reign when you’re there to print a T-shirt army, so potentially worth it for budding T-shirt entrepreneurs. The beginner’s class is generally print to paper, but if you’re sneaky like me, bring along a T-shirt or two.

Other options around London (untested): 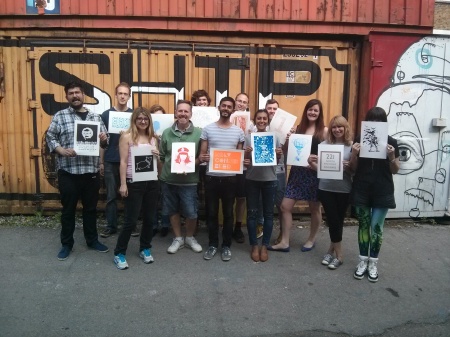